Inclusive Employers > Blog > How to tackle racism within a broader vision for inclusion: learning since the death of George Floyd

How to tackle racism within a broader vision for inclusion: learning since the death of George Floyd 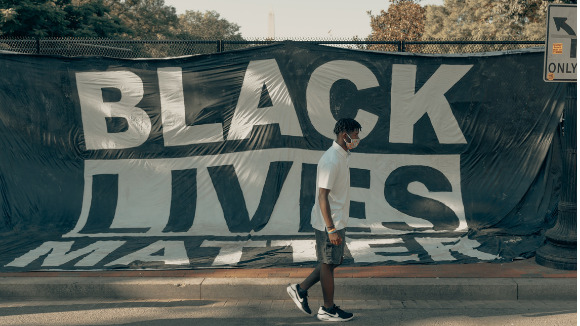 Ahead of Black History Month, beginning on October 1st, our Senior Inclusion and Diversity Consultant, Debbie Epstein shares her honest and insightful reflections on what she has learned and how her feelings have evolved on inclusion and race equality, over the last six months.

This year could be the first time that National Inclusion Week, 28 September – 4 October, has overlapped with the start of Black History Month, beginning 1 October.  Members have been asking for advice on how to coordinate activities that link the two and it got me reflecting on how the two areas relate – inclusion and race equality – but also on what I have learnt about the two concepts since the murder of George Floyd.

In the direct aftermath of George Floyd’s murder, I was enraged that we were spending so much time thinking about how people could get comfortable talking about race. I learnt later that my colleagues were feeling perplexed by my reaction, and not sure how to handle this strength of feeling.  I kept repeating ‘We don’t support people to feel comfortable with sexism or homophobia, why is this different, why are we handling this topic with kid gloves?’

Co-facilitating a webinar in June on ‘Confidence in our conversations about race’ helped me to deal with some of my rage.  My co-host explained the different sociological reasons for our awkwardness around the subject, including the fact that most of us will never have had the opportunity to practice or become familiar with conversations on this topic – so it is brand new ground – which helped me think about it differently. I was reminded that we are not all inherently racist or bad (although some people might be), but that we need to create opportunities to become comfortable with the topic before we can be proactive. During the session I got excited about the idea of creating safe spaces for White people to build trust amongst each other, and then awareness around race in order to take forward action.

It won’t be surprising that the Black Lives Matter movement has sparked an increased number of requests from organisations seeking support, in particular for EDI/culture reviews in order to inform their strategies and action plans.  From listening to staff experiences as part of these reviews, one important piece of learning has been that single-strand focused initiatives don’t always have an impact on the lived experiences of staff.  What has come out strongly is the need for thoughtful listening, to understand the experiences of staff and to identify impactful changes in response, rather than a more reactive approach, just to be seen to be doing something.  This all comes back to the need to create an inclusive culture as the foundation point: somewhere where people can be themselves and feel a sense of psychological safety.

Building on this, I have been incredibly encouraged by the programme I have been delivering recently with a large global corporation. This programme titled ‘Conscious Inclusion’ is a full day, run on Zoom, focusing on behaviours, from the overtly inappropriate to the more subtle. As part of the programme we share the evidence base that demonstrates the impact of these behaviours and provide tools and frameworks for interrupting them, including Active Bystander. Delegates are encouraged to complete a detailed Inclusive Behaviours self-assessment. We have been conducting pre and post evaluations of the programme which have shown a significant impact on behaviours and attitudes.

Alongside my co-facilitator, I delivered the first of two webinars on ‘Anti-racism – how to implement structural change’. We both felt so energised and optimistic after the session which provided a toolkit for making real change.  I presented ideas on ‘White privilege’ and ‘Anti-racism’ as part of the session and it was helpful to get my co-facilitators view on these: although they can be useful concepts for understanding the bigger picture they only go so far – we need to be flexible enough to treat each situation and person differently in order to engage them in this work.

At the start of the increase in the Black Lives Matter movement, I was concerned that this would be a flash in the pan moment and nothing much would change.  What has amazed and delighted me is that organisations are still live to the issues.  My sense is that they can no longer afford not to do something.  There were already undercurrents of dissatisfaction from BAME networks emerging in organisations due to the Covid crisis and the death of George Floyd means there is now an urgent demand for change.  BAME voices have come together and people are no longer fearful of calling out mistreatment, because there is a realisation that the alternative could be much worse.  This really feels like a watershed moment – where we have to stop, take notice, listen and respond.

Organisations that assumed significant progress on inclusion had already been made, have not been immune to this discontent.  There is a realisation that until there is deep connection and human trust between colleagues, that any progress on inclusion initiatives is fragile and can be disrupted by what might appear small and disconnected mistakes.  Owning up to these mistakes and listening to the hurt that lies beneath is the only way to make progress and build the trust required for this vital lasting change.

So how does our work to promote inclusion and tackle racism fit together and how can we seamlessly move from celebrating NIW to BHM?  My learning during this period has made me more certain than ever that we need to focus on one central theme, building the right culture and behaviours.  We need to listen to all of our staff, including those who are the most dissatisfied, we need to understand the causes of their experiences, we need thoughtful and deliberate action rather than reaction and we need to be open to continuously reflecting on our role in maintaining the status quo.