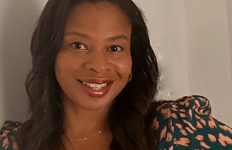 Deborah Dillon, Inclusive Employers Associate, has over the past few weeks spoken more about race than she has in the past four decades – in her blog she questions the cost to her own well-being and that of others who have found themselves doing the same.

Over the past few weeks, like so many other black people, I have spoken about my race more than I have in the last four decades! Sharing our lived experiences as black people in the UK, felt initially like the way forward in order to help receptive white people get a sense of what it actually means to be black in the UK. In doing so though, it meant bringing to the surface, deeply buried experiences and poking a stick at concealed pains that have been long buried. For reasons such as preserving one’s mental health, but also to enable us to continue navigating through white society and, in the process avoid the accusation of having the metaphorical, “chip on the shoulder” that is so quickly levied at black people.

I have two defining moments when it comes to what it has meant to me to be a black person in the UK. The first took place in 1977, when the National Front marched along Stanstead Road in Lewisham, South East London, where I had been spending one of my many childhood weekends with my extended family. Hundreds marched with their Union Jacks, a sea of angry protesters surrounded by what seemed to me to be thousands more uniformed police. Whilst I can’t remember what they were chanting, I clearly remember the feeling of terror and fear it evoked. It was the same feeling that would overcome me when seeing a skinhead in the street, often accompanied by with their menacing dogs, or the words, ‘wogs out’ sprayed in graffiti on any accessible brick wall, serving as a persistent reminder that I was not welcome in the country in which I had been born.

The second was not long after the first, as I would have been around the age of seven or eight. My primary school year group was reflective of my school as a whole, it was predominantly white in make-up. That year, the annual school play was going to be “The Wizard of Oz”, and those who wanted to be considered for the lead role of Dorothy, were instructed by the teacher to raise their hands in that good old-fashioned school way. I can still feel the force of my arm attached as it was at that time to my bold and unlimited self. It shot up in the air stretching higher and higher, and as it went up the wriggling of my fingers, as I bobbed up and down trying desperately to make myself just that bit taller so the teachers could not miss me and would know without a shadow of a doubt just how much I wanted to be chosen for this part.

When I look back, I choose not to judge those present for their reactions. Upon reflection, it was arguably natural for the time – and by natural I mean the laughter –the sniggering type from the children, which even included the few other children that looked like me in the class. Worst still, was the same initial reaction I was exposed to by the teachers, which quickly turned into nervous laughter, then confusion and ultimately anxious discomfort when they were forced to acknowledge the crushed look upon my face. You see, children understand a lot more than you think!

I didn’t know it at the time and didn’t care to revisit the rationale, instead I just held the feeling and the memory, but having shared this story countless times over the past few weeks, and really reflecting on it, I see now that they just could not comprehend it! Their minds just could not compute, how this little black girl, with five unruly plaits in her hair and thick full lips (great for applying lipstick to apparently, as one of the mothers who’d been designated make up duty on the night of the play, felt comfortable sharing with her fellow chaperones, as she readied me in preparation for my part as one of the back-up singing tree quartet, I had finally been assigned in order to “aid” white Dorothy’s vocals) could possibly be Dorothy as she journeyed home from Kansas. It was in that moment that I absorbed the perceived limits to what I could achieve in life because of the colour of my skin.

I have experienced in my lifetime an untold number of micro and macro aggressions, along with instances of out and out racism. Although I can say I haven’t been the victim of overt racism in perhaps the last 15 years, we still have not made any real meaningful strides, since I was that little girl sitting on the carpet with my hand in the air, begging to be chosen on merit and given a chance. Many of the more subtle experiences I have encountered, have been normalised, excused, explained away, as well as repressed, along with my most harrowing memories, until now.

If I’m honest I was not releasing these suppressed memories under duress. In fact to the contrary, I found myself volunteering for the task, actively encouraging  those who wanted things to be different to approach me, offering up chunks of my lived experience to my white colleagues, despite not having reconciled them with myself fully as yet. And if I’m honest it felt okay, well at least in the most part, even when I moved from one-to-one interactions, to sharing on a wider platform. Wider group sharing left me once the initial adrenalin had worn off, feeling “fragile”, as the impact of those experiences on my life really hit home.

Even then I focused on the positives, it didn’t feel like an entirely bad thing because at least now I was able to understand myself, my life and my decisions far more clearly and vowed to counteract the impact of those experiences from now on. My new life mantra is, “I will not shrink, I will no longer be muted and I will be unlimited!  Whilst on the one hand I could argue that the strategy has worked out for me, there is something about it that niggles, that just does not feel right, that still feels as if it should not be necessary.

Many of us would have seen or heard about the recent heartfelt and powerfully delivered interview with the former cricketer Michael Holding, when he spoke about, white privilege, the overlooked contribution of black people in history and the important role education needs to play, if long overdue change is to be achieved.  His plea ended with a weary sigh, that black people up and down this country not only heard, but felt and understood. But it was his interview the following day, and watching a successful 66 year old black man, reduced to tears when discussing the racism his parents had faced, that really exposed the toll of awakening our piercing realities. That is what finally led me to think, that there has to be a better way. Because, whilst the sharing of experiences undeniably creates understanding and a shift in the mindset of some, (which proceeds change and I have seen happen), it does not come without a cost!

Reliving our experiences is undoubtedly a form of trauma. As a friend quite rightly pointed out to me when she helped me work through my vulnerable “fragile” moment following the impact of my sharing, would we expect a domestic violence or rape victim to have to live their experience over and over again to help those who have not had such experiences understand? Such shocking incidents are naturally afforded an almost in-built level of empathy, with these abhorrent acts unanimously denounced, with people being both quick to action, and to defend the rights of the perceived victims.  So, what prevents this sentiment being so readily extended to black people? Are white people really blind to the inequities and inequalities that black people face on a daily basis? Can this really only be realised, by hearing the stark and often gory accounts from the mouths of those affected?

This got me thinking about the crux of an old video by the white American diversity educator, Jane Elliot, that has made a resurgence in the midst of the murder of George Floyd and the subsequent worldwide protests. Elliot asked a mostly all white audience if they would stand up if they would be happy to receive the same treatment as their fellow black citizens.  No-one stands, so she repeats the question, and again no-one stands.  She concludes by stating, “that says very plainly that you know what is happening, and you know you don’t want it for you, I want to know why you are so willing for it to happen for others?”

Think about it, let what she said sink in, better still watch the clip. Okay, so it took place in America, however if you are a white person in the UK right now, how would you answer? Would you stand? I’m willing to bet that if the question were asked in the reverse of an all-black audience, the reaction would be very different. Passersbys, unaware of the question Elliott had just posed, would observe the scene and think understandably that they had just witnessed Elliot receiving a standing ovation.

So my niggling feeling remains, is it really for Michael Holding, myself and countless  other known and unknown black people to open up often unhealed and raw wounds, in an attempt to seize this moment in history to help our white friends and neighbours to better understand? If you know deep down that as a white person in 2020, you  would remain seated when asked Elliot’s pivotal question, then that should be lesson enough, and the only discussion left to be had, is the one where you share with your colleagues, friend and family, what  you personally intend to do going forward to bring about the change required to bring about a fairer and thus better future for us all!