How effective are your staff networks? Does your organisation have any? And have you considered just how beneficial they can be? This week Steve Copsey, Senior Inclusion and Diversity Consultant, shares the significant role staff networks have had on both his personal and professional life. 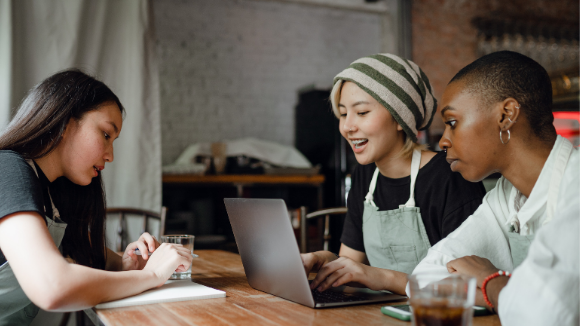 Staff Networks can be like marmite. Many people either love them, or hate them.

We’ve all had experiences within organisations where there might be a network for “network’s sake”. Some organisations start up networks without first thinking of their individual organisational need. For example:

When handled badly, networks can leave a really funny taste in our mouths. So much so that we might not want to engage with them the next time we come across them. But, done well, staff networks are so much more than a nice to have. They can:

But they can do so much more too. A powerful network can re-write policy, be the go-to for major business decisions. Ultimately, great staff networks can reshape organisational cultures and even change lives (both in terms of individuals and different demographics).

Of course, I work for an Inclusion and Diversity consultancy, I’m going to be espousing the values of everything inclusion and diversity related! But if it wasn’t for staff networks, I wouldn’t be in the role I am today. My first-hand experience working with and being a part of staff networks has shaped not only my career over the last five years, it’s shaped my life too.

I hadn’t really had any exposure to staff networks until my mid-twenties. I’d worked at organisations that were too small to warrant them. As a young gay man, coming from and mainly working in the Yorkshire Dales for the first eight years of my career, I hadn’t really had any exposure to other gay men in a professional setting. I saw no openly gay men (or other orientations and gender identities) in my industry.

After a couple of years working for a bigger company, that changed overnight. Seeing our intranet explode with discussion of LGBTQ+ events and meet ups – I felt a sudden urge to belong. How could I get involved?

Reaching out to the network for the first time was both terrifying and extremely empowering. I’d noticed so much of their network activity was London-centric, so I plucked up the courage to ask: “why aren’t you doing anything outside of London?”

The response I received wasn’t what I was expecting: “Why aren’t YOU doing anything outside of London?” The rest as they say, is history.

Within a month I was connected up with other like-minded individuals across the industry in the north and we’d hosted our first LGBTQ+ network for the industry in Leeds.  We were invited to join the steering committee of a national industry LGBTQ+ network, whose primary aim was to connect LGBTQ+ individuals from organisations that might have been too small to have their own networks.

Within two years, I was made national co-chair. Within another two years we were nominated for, and received, the Queens Award for Voluntary Service – the volunteer group equivalent of an MBE – for the work we did in promoting LGBTQ+ awareness and helping to shape the financial services industry.

The confidence and empowerment provided to me by the network transferred over to my day job too, which went from strength to strength. I was leading on national corporate strategy, I was working on international EDI strategy, I was selected for global leadership development programmes. Ultimately, it lead me down the route that so many millennials now seem to take: a focus on what’s right, not just from a corporate perspective, but for me.

The hours I was spending in the office, often 60+ a week (with my voluntary inclusion work on top), were doing nothing for my mental health. Stress, anxiety, suicidal thoughts.

Having the support of other network members is an invaluable part of having a staff network. Because they can become more than “other members,” they become your friends, your confidantes, sometimes your informal therapy.

The opportunities that staff networks have provided me with, the doors that opened because I could finally be myself, the people I’ve met and the friends I’ve made. They’ve not only changed my life, but saved it too.

If you’re interested in how to make the most of your staff networks we have a number of training sessions available. If you’re looking for ways to empower your inclusion champions and network leads, ask us about our Level 4 and Level 6 qualifications!