Inclusive Employers > Blog > What is Pride Month? Everything you need to know

What is Pride Month? Everything you need to know

Find out why we celebrate Pride and how workplaces can use this time of the year as an opportunity to engage with and increase understanding of the LGBTQ+ community and promote inclusion. 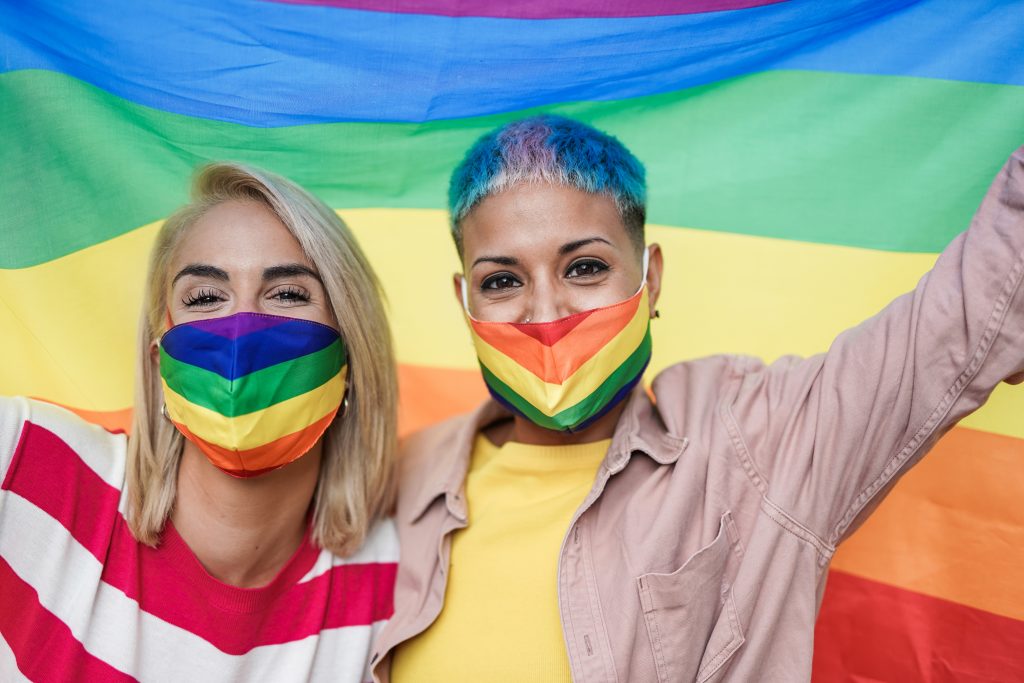 Many of you will have plans in place to celebrate and take action on LGBTQ+ inclusion as part of Pride Month 2022.

At Inclusive Employers, we want to ensure we’re encouraging organisations to take a practical, holistic approach to LGBTQ+ inclusion that goes beyond rainbow logos.

Pride Month is a fantastic time to engage with the LGBTQ+ community and progress LGBTQ+ inclusion goals in your organisation.

Not only will we be explaining why Pride Month is an important time of year and sharing ways to celebrate pride at work, but we will also show you how your efforts during this time can make a positive impact for your LGBTQ+ colleagues every day in the workplace.

What is Pride month?

Pride Month is about acceptance, equality and celebrating the work of LGBTQ+ people. These celebrations usually take place in the form of an outdoor parade, where large crowds gather to march, often waving the rainbow pride flag as their banner.

These marches are not only an opportunity for the LGBTQ+ community to show their pride in their sexual orientation or gender identity, but sometimes also serve as demonstrations for legal rights such as same-sex marriage or as we have seen in the news recently, complete protection from conversion therapy.

Pride Month is also an opportunity to raise awareness about LGBTQ+ history and educate the general public about LGBTQ+ topics.

The history of Pride Month

Pride is not just a celebration. Although it is an important to time to celebrate the progress that has been made across legislation, attitudes and behaviours, it is also a continued protest.

The first Pride, in June 1970, marked the first anniversary since the uprising at New York’s Stonewall Inn.

Since then, the parades have also been a sign of fighting for liberation, visibility and equality. In the UK, particularly up until the repeal of Section 28 in 2003, Pride had a more protest feel than a parade.

The Pride Month meaning remains the same and is a time for people within the community, and their allies, to celebrate successes in LGBTQ+ inclusion, but it is also a time for reflection.

Everyone will have different experiences to reflect on. For example, on personal journeys of self-discovery and acceptance or remembering friends and loved ones lost during the HIV/Aids pandemic of the 80s and 90s.

For the LGBTQ+ community, history plays a significant part in shaping the current story and reminds us: although lots of progress has been made, there is still lots more to do.

At first, the month was known as “gay Pride Month”, but has now progressed to include and reflect on all the LGBTQIA+ community.

When is Pride Month?

Pride Month takes place every year in June because the event that started the gay rights movement in the United States of America began in June 1969 in New York City’s Greenwich Village, at the Stonewall Inn.

It was a popular gathering for the LGBTQ+ community and was the target of a police raid on 28 June 1969. The police arrested the bar’s employees for selling liquor without a license and physically assaulted many of the patrons as they forced them to leave the inn.

The LGBTQ+ community in Greenwich Village, witnessing this police harassment, decided to intervene, forcing the police to call for backup as 400 people rioted.

The police eventually dispersed the crowds, but the Stonewall Riots would continue to inspire the gay rights movement in the United States.

It’s useful for organisations to be aware that some Pride events may take place in July. For example, London Pride will usually be scheduled for July to commemorate the first official UK Gay Pride Rally, which took place in London on 1 July 1972, as it was the nearest Saturday to the anniversary of the Stonewall Riots.

You can find out when your local Pride parade is happening, by checking the website of your local LGBTQ+ organisations or view the Pride month calendar.

Why is Pride Month important?

A lot of progress has been made for LGBTQ+ rights regarding issues such as marriage equality, but there is more employers can do to support the LGBTQ+ community.

For the most marginalised groups in the LGBTQ+ community, we are seeing backwards trends to progress. The trans community are facing laws being passed across the world to make inclusion and transition an even more difficult topic and process than it already is.

There are also rising numbers of trans murders and violence. Those who are part of the ‘silent letters’ groups within the community (including non-binary, agender, gender queer) also face discrimination, harassment, and erasure.

Employers can play a big part this Pride Month by stepping up and taking action to make sure everyone in the LGBTQ+ community feels safe and included at work every day of the year.

It is for all these reasons, that as employers and workplaces, we show solidarity and support to the LGBTQ+ community at this time of year (and always!).

The great news is everyone can do something, even if it’s something little to start your journey of LGBTQ+ inclusion today. Share the below LGBTQ+ Pride Month ideas with your teams to inspire them into action for Pride Month 2022:

Making assumptions on sexuality, gender and sex, based on heteronormative ideas is not acceptable. We shouldn’t make assumptions based on our own world view. Learning more about all groups of people and individuals can help to challenge this.

We have an LGBTQ+ glossary that will help you become familiar with all the LGBTQ+ terms and give you the confidence to raise awareness and have important conversations at work.

If your friends or colleagues aren’t using the right language, step in, don’t step by. It’s important we show solidarity and try to embed positive change even if we’re not the one impacted.

Stepping in before harmful behaviour turns into bullying and harassment will also help avoid discrimination cases or losing LGBTQ+ talent.

There are lots of strategies to call out unacceptable behaviour at work and managers can play a key role on how to tackle overt and obvious exclusionary behaviour, in the moment and within policy. We can help you come up with a framework that works best for your organisation.

Everyone can benefit from learning more about LGBTQ+ topics. Whether you’re a member of the LGBTQ+ community who wants to learn more about how history was made when it came to gaining rights, or if you want to become an ally and support the community, webinars are an interactive and fun way to gain more knowledge.

We will be hosting webinars about various LGBTQ+ topics throughout Pride month to support our members and non-members learning.

Pride is a celebration, but don’t get caught up in just doing the performative actions.

Invite colleagues to share their Pride Month stories in meetings, webinars and events. Make sure you take the time to hear the experiences of those who are a direct part of the community.

As we mentioned previously, rainbow logos and rainbow flags should not be your only way of showing allyship to the LGBTQ+ community.

But, in combination with other forms of allyship, decorating your workplace with Pride flags can be a way to communicate to your LGBTQ+ colleagues, clients and visitors that your organisation is a safe space for them.

If you’re going to display a flag in your workplace in support of the LGBTQ+ community, we would recommend the new Pride flag.

The new flag has been redesigned to incorporate elements from various LGBTQ+ subcultures. You can see this flag and learn about all the LGBTQ+ flags in our guide to LGBTQ+ flags.

Misgendering happens when we jump to the conclusion that someone is ‘male’ or ‘female’ based on characteristics such as name, gender presentation or even the sound of someone’s voice.

When we jump to these conclusions, we often use gendered pronouns, titles, etc. incorrectly. For example, trans or cis women may experience misgendering if they have short hair because many people associate short hair with masculinity.

Misgendering can have a negative impact on people’s emotional well-being, especially if the person is trans or non-binary.

One way we can prevent misgendering is to encourage our colleagues to include their pronouns in their email signatures or social media profiles.

Adding our pronouns to our email signatures, social media profiles and stating them at the start of meetings is a simple step cisgender people can take to enable those from the non-binary and transgender communities to feel more seen and recognised.

Promote allyship and be ready to listen

Allyship in the workplace is crucial for inclusion and equality. Research shows that having just one strong ally can help reduce the possibility of suicidal thoughts of LGBTQ+ people by 40%. Having someone to actively listen and being able to signpost help is something we can all do.

If you want to be an LGBTQ+ ally but are unsure where to start, we have a quick guide about the various types of allyship and what actions you can take.

Provide media for your team to explore

Interacting with LGBTQ+ media such as books, films and TV shows can be a fun and easy way of learning about LGBTQ+ history and other LGBTQ+ topics.

We have Pride Month media suggestions to share with your teams to encourage them to learn and engage with these topics in a medium that suits their learning style.

How Inclusive Employers can help your organisation celebrate Pride month

Here at Inclusive Employers, we are driven to help employers recognise and understand the importance of celebrations such as Pride month. We are also committed to helping organisations when Pride month ends.

Our LGBTQ+ resources can support you to do this, which include our Pride Month factsheet. Members, you can access these for free via your online account.

We have created a package of five Pride Month webinars that are designed to support organisation’s throughout all stages of their LGBTQ+ inclusion journey.

Non-members, please get in touch today to find out more about these resources. We can also provide bespoke training to progress your LGBTQ+ inclusion agenda – contact us to find out more.