Here at Inclusive Employers, we have all shared our LGBTQ+ role models as part of LGBT+ History Month.

Keep reading to learn more about our role models and why we admire them. 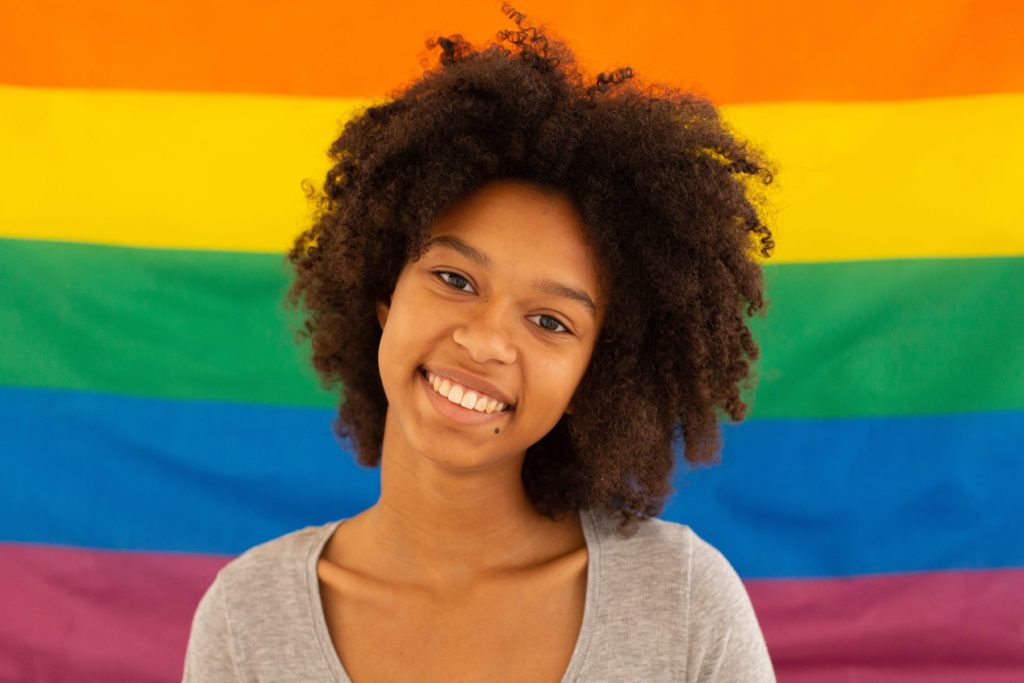 Travis is a performance artist, writer, poet and theatre-maker originally from Bristol. They beautifully fit this year’s theme of LGBT+ History Month theme of Politics in Art.

They take moments of transphobia they’ve experienced themselves and from those in the community and turn it into art to explore the fear-mongering of trans identities in society and media.

I was honoured to interview Travis once in a previous role and I was so excited to invite them to speak because I seek out every opportunity I can to hear Travis speak or their work.

I have never heard someone speak so eloquently and poetically about transphobia and other intersecting identities of race and class. They manage to make a very daunting and complicated topic into something poetic.

My role model is Rosie Jones.

She is a comedian who is gay and has Cerebral Palsy. I find her approach to disability and intersectionality refreshing and inspiring.

Chris Berntsen is a queer artist working out of New Orleans. I first found him on Instagram through his wonderful photos of queer people at Jacob Riis beach, and I have followed his career ever since. He recently completed his Masters in Fine Arts and curated Brief Interruptions Curatorial – Chris Berntsen (format.com). Chris’ work captures the beautifully diverse world of the queer community with a lot of love. I find his work very beautiful.

James Baldwin. For me, Baldwin is the perfect amalgamation of politics in art. I admire how he held the intertwining and esteemed titles of novelist, poet and activist. He has always fascinated me because he was truly before his time, and though his work was published largely before 1980, it resonates just as powerfully today.

Cavallo came out in October ’21 and is the only top-flight male professional currently playing who has come out as gay.  On the 8th January ’22, the 22 year old received homophobic abuse when his team Adelaide United played against Melbourne Victory.

“As a society, it shows we still face these problems in 2022,” Cavallo continued.

“This shouldn’t be acceptable and we need to do more to hold these people accountable. Hate never will win.

“I will never apologise for living my truth and most recently who I am outside of football. To all the young people who have received homophobic abuse, hold your heads up high and keep chasing your dreams. Know that there is no place in the game for this.”

Role models like Cavallo are so important, challenging stereotypes and showing the LGBTQ+ community that sport is a space for them.  Whilst there is still much to do to tackle homophobia in football (and particularly in the men’s game) players will pave the way for others to follow and provide a much-needed platform to tackle homophobia and biphobia in sport.

My LGBTQ+ role model is Michaela Jaé Rodriguez. She’s an American actress, who played one of the lead roles in Pose, a series that has made history by having the largest cast of trans actresses.

In 2021, she became the first trans woman to be nominated for an Emmy, Outstanding Lead Actress in a Drama Series, for her performance in the final season of Pose.

The authenticity she brings to the role is to be admired, and I believe she, alongside her co-stars, have educated a generation of people through this show.

Besides being an LGBTQ+ activist during some of the most difficult times for the community, Vito Russo (1946-1990) made an indelible contribution to LGBTQ+ History through his book “The Celluloid Closet” (1981) which surveyed queer representation through the history of cinema at a time when such conversations were discouraged or downright suppressed.

The white heterosexual man, who supported me to push the boundaries, showed me that I could play football and cricket if I wanted and indeed told the school when they asked him to coach the boy’s cricket, that he would only do so if his daughter and other girls were allowed… Guess what? It was 1979 and the school agreed. In games, I was released from netball every second week to play football… ground-breaking for its time.

Unfortunately, the rest of England hadn’t caught up with Dad at this point so taking football and cricket beyond school games was not an option for me.

Dad is a fantastic example of the reason we need allies, and it is fair to say I would not have continued to push the boundaries and fought for injustice if it wasn’t for his and Mum’s guidance.

Born on 21st September 1969, Billy Porter is an American actor, singer, and author. He has won many awards including becoming the first gay black man to be nominated and win in any lead acting category at the Primetime Emmys.  In 2020, he was included on Time‘s list of the 100 most influential people in the world, as impressive as this is, this is not the reason why I would invite him to my party. I would invite because of what he represents and his comfort within the skin that he is in.

It’s hard for any of us to feel accepted particularly in a world where stereotypes and bias stop us from expressing who we are. However, through his art, be that acting, singing or writing he allows his full self to shine through.

For me, Billy Porter shows no fear and has achieved things that many of us could only imagine but remember he did also have to imagine them first.

Being diagnosed with HIV in June 2007 and living with it for 10 years, he used his own authentic life experience to create the character Pray Tell, from the hit series Pose – this was his outlet.

“I was able to say everything that I wanted to say through a surrogate,” Billy said, acknowledging that nobody involved with the show had any idea he was drawing from his own life.

What a way to show your own courage and to be brave enough to use it to educate others.

My LGBT+ Role Model for LGBT+ History Month 2022 is Amrou Al-Kadhi, a non-binary drag queen who also goes by the stage name Glamrou.

They’re also a writer, filmmaker and actor (You may have seen them in the new Venom movie by Marvel!). I highly recommend their book “Unicorn: The Memoir of a Muslim Drag Queen”, where they share their journey of how they learned to celebrate and embrace their gender identity, sexual orientation, and Iraqi Muslim heritage.

As a disabled person of biracial heritage, I found the exploration of intersectionality invigorating, and the language Amrou uses to describe their journey is engaging and vibrant. Well worth a read!

Rina is a Japanese-British singer-songwriter. Previously, she identified as bisexual but came out as pansexual in 2018. Rina is very open about the lack of representation for many, which resulted in her not being comfortable in her sexuality.

Rina touches in her songs, specifically “cherry” about how often bi and pan people “don’t feel authentically queer when they’re in heterosexual relationships.” Not only has she fought for representation with regard to her orientation, but she also fought for British immigrant artists to receive British awards.

I think Rina is a fantastic role model as she is so transparent about her sexuality, which is valuable for people who are bi or pan to “see someone like them” and be represented in the music and film industry.

My LGBTQ+ Role Model is Brenda Howard because she was a keen activist for LGBTQ+ rights but also an open and proud bisexual. She was also known as “The Mother of Pride”. In 1969, a month after the Stonewall riots, Howard conceptualised and coordinated the pride rally known as the Christopher Street Liberation Day March (at which the Stonewall Inn is based).

A year later, Howard also organised the first of what became the annual Liberation Day March, which later transformed into NYC Pride and was the inspiration for Pride Parades throughout the US, earning Howard her legendary title. The first Pride march was later established in the UK in London in 1972.

Pride marches and events across the world would not be what they are now without the influence of Howard, and the fact that Howard was an open and proud bisexual is hugely important to me as it helps to increase the visibility and raise awareness of the bi+ community.

The bi+ community can often be a forgotten or lesser-known part of the LGBTQ+ community, however, Howard ensured that this was not the case with her continued activism for bi+ visibility. Howard was also an activist for women’s rights, equal treatment for people of colour, and rights for those affected by AIDS.

My role model is Lena Waithe. Lena is a black gay woman. She started out as a writer for TV. So not only did she dive headfirst into a white, straight man’s world as a woman, she did it as a black woman. A black gay woman. That’s got to take guts!

In 2017 she won the Emmy for Outstanding Writing for a Comedy Series – the first Black-American woman to win an Emmy in this category. In the last decade or so she’s also started to work on the other side of the camera as an actress in shows such as Master of None, Transparent, Westworld and Big Mouth.

She’s arguably one of the leading representations of masculine-presenting black lesbians in mainstream media (how many others can you name?). She’s never been apologetic about her orientation or the way she presents herself and has always been open about who she is.  She’s also a self-described “lazy Christian”  – with a true belief in God and Jesus.

As someone who’s an atheist gay man, it’s so refreshing to see someone I look up to who has a strong undeniable faith but doesn’t let it define them. It’s just a part of who they are. We need more of that representation in the LGBTQ+ world.

Walt Whitman, the poet, was born 202 years ago. His writing will, I am sure, have given from the outset, comfort and inspiration to many who were coming to terms with their sexuality.

Although it is not known that Whitman was ever ‘out’ gay, his writing was there to attest to a world which many would not venture into or gave courage to, those who would.

I believe that poetry and prose open doors for us and give us a glimpse into other worlds beyond our own and enable us to understand ourselves and others better.

I came to Whitman relatively late, perhaps in my late twenties or early thirties when I read We Two Boys in a collection of poems given to me by a dear friend of mine who was very ill with AIDs. The poem spoke to me of the urgency and pace of life for many gay men in the late 80s and early 90s as the pandemic took its grip.