Many people avoid using certain LGBTQ+ terms because they’re afraid of saying the wrong thing and offending people. This glossary aims to give you the words and meaning to make conversations easier and more comfortable.

Everyone has a right to self-identify and it’s important to note that people will use a variety of terms and labels to express themselves, not all of which are included in this glossary. Always listen and respect a person’s self-identified terminology. 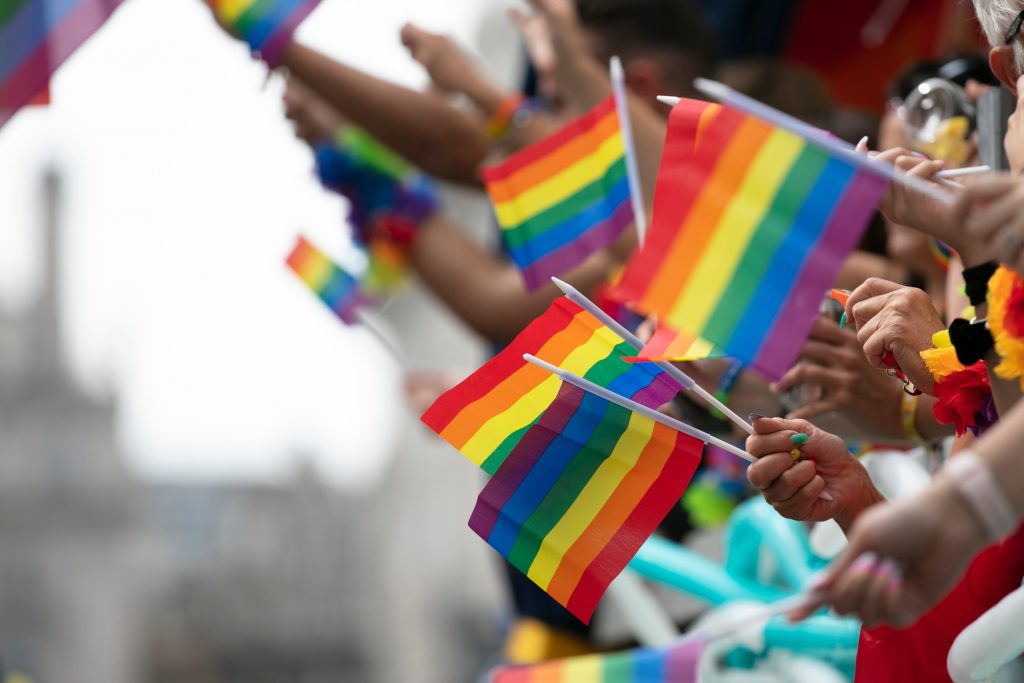 Asexual: A person who does not feel sexual attraction or desire for other people.

Aromantic: A person who does not feel a romantic connection for other people.

Biphobia: The fear, hatred, or discomfort of those who are sexually or romantically attracted to more than one gender. Can often be displayed through words, actions, or behaviours such as negative stereotypes about bisexuality, denial that bisexuality is a genuine orientation, and/or bisexual erasure.

Biromantic: A person who feels a romantic connection to two or more genders.

Cisgender: A person whose gender identity aligns with the sex they were assigned at birth.

Coming out: A phrase used to describe the act of sharing one’s sexual orientation and/or gender identity with others. For the LGBTQ+ community, this does not just happen once. This is a continual process that occurs throughout all areas of a person’s life, both personally and professionally.

Gay: A person who is sexually attracted to another person of the same gender.

Heterosexual: A person who is sexually attracted to another person of the opposite gender.

Heteroromantic: A person who feels a romantic connection to  the opposite gender.

Homophobia: The fear, hatred, or discomfort of those who are sexually or romantically attracted to the same gender. Can often be displayed through negative words, actions, or behaviours such as prejudice, stereotypes, insults, discrimination, and violence. All of the LGBTQ+ community can experience this in some way, no matter orientation or gender identity.

Homoromantic: A person who feels a romantic connection to only the same gender.

Intersex: Intersex is an umbrella term for differences in sex traits or reproductive anatomy. Intersex people are born with these differences or develop them in childhood. There are many possible differences in genitalia, hormones, internal anatomy, or chromosomes, compared to the usual two ways that human bodies develop. Some intersex traits are noticed at birth. Others don’t show up until puberty or later in life. Intersex people often face shame—or are forced or coerced into changing their bodies, usually at a very young age. Most surgeries to change intersex traits happen in infancy. The intersex community is slowly becoming more visible but is still and overlooked part of the LGBTQ+ community.

Gender binary: The classification of gender and gender expression being two distinct and strict categories of male/female and masculine/feminine. In most Western cultures, gender is seen as being an either/or choice. In this way of seeing gender, you can either be man or woman, boy or girl, nothing else. A big part of LGBTQ+ activism focuses on challenging this limiting view and being more inclusive of the full gender spectrum.

Gender expression: How an individual chooses to express their gender identity through their appearance, behaviour, demeanour, or characteristics.

Gender fluid: A person who does not identify with a single fixed gender or has a fluid or unfixed gender identity.

Gender identity: A person’s innate sense of their own gender which may or may not correspond to the sex they were assigned at birth. Note: a person’s gender identity is independent of their sexual/romantic orientation.

Genderqueer: A person whose gender identity does not fit the constraints of the gender binary, but instead views gender as something which is fluid and identifies with neither, both, or a combination of male and female genders.

Lesbian: A woman who is emotionally, romantically and/or sexually attracted to other women. Women and those who identify as non-binary may use this term to describe themselves.

Non-binary: A person whose gender identity does not fit the constraints of the gender binary, but instead views gender as a spectrum and may identify as being both a man and a woman, somewhere in between, or as falling completely outside of these categories.

Outing: Exposing a person’s sexual orientation or gender identity to others, without their permission. This could potentially lead to a harassment claim under the Equality Act 2010.

Queer: An umbrella term used by the LGBTQ+ community who may not identify or associate with the labels used to describe orientation or gender identity. It is often used as an all-encompassing term for identities within the community, also taking into account culture, politics and worldview. Once a derogatory term, this has recently been reclaimed by the community – however some may still find it an offensive word.

Questioning: A person who may be unsure of or exploring their orientation or gender identity.

Pansexual: A person who feels sexual attraction to any gender. Attraction is not necessarily simultaneous, equal, in the same way or to the same degree. Some pansexual people may describe themselves as being attracted to people based on personality, not gender.

Panromantic: A person who feels a romantic connection to any gender.

Pronouns: Used when referring to another person, linked to a person’s gender identity. These include but are not limited to: male (he/him),female (she/her),non-binary/gender neutral (they/them) or (ze/zir). A person may use a mix of pronouns depending on their gender identity.

Sexual Orientation: Who we are sexually attracted to. Note: a person’s sexual orientation is independent of their romantic orientation and gender identity.

Transgender / Trans: An umbrella term for people whose innate gender identity and/or expression differs from the sex they were assigned at birth.

A trans person is someone whose gender differs from the one they were assigned at birth. At birth we are assigned a gender (boy or girl). For cisgender people this gender feels right. The gender assigned to trans people at birth (boy or girl) is not right for them. Transgender people may identify as male or female, a trans man or trans woman, or they may use a different term such as agender, non-binary, or a term specific to their language, generation or culture.

Transphobia: The fear, hatred, or discomfort towards those whose gender identity or expression does not conform to the gender binary view. Can often be displayed through words, actions, or behaviours such as negative stereotypes, outing, and the deliberate misuse of pronouns.

Transitioning: The journey and process of changing an aspect of a person’s identity or presentation to ensure the individual can live more fully as the innate gender in which they identify as opposed to the gender they have been assigned at birth. This may include, but is not limited to: medical transition, such as hormone therapy or gender affirming surgeries; legal transition, which may include changing legal name and sex on government identity documents; social transition, such as changing appearance, expression, name, and pronouns. This is a very person and individual journey, as a Transgender person may choose to undergo some, all, or none of these processes.

We offer further advice and tips on how to support LGTBQ+ colleagues in our podcast, where you can also get an insight into experiences of LGBTQ+ stereotypes in the workplace, LGBTQ+ networks and the use of pronouns.

If you’d like to know more about how to build inclusive workplaces from our expert team, you can get in touch or Members can speak to their Inclusive Employers Account Manager.